Surgery to the Hip

This post is to discuss common surgical interventions for the hip joint, for both hip fractures and osteoarthritis of the hip (as mentioned previously here). This will only cover those interventions performed on the bony structures, and not those to soft tissue structures that would affect the hip such as Tensor Fascia Latae (TFL) release.

There are four main surgical interventions to the hip joint, all that occur around the head and neck of the femur, and the acetabulum of the pelvis. These are:
The latter three all require the patient to adhere to precautions for a period of 12 weeks after the surgery, but there is evidence to say that these precautions are not required for hemiarthroplasties, which will be discussed later.
The latter three are also utilised as surgical interventions for osteoarthritis as well as hip fractures.

A DHS is usually the first option for a fracture to the neck of femur or intertrochanteric fracture.
This is where a specialist type of screw is placed through the femur and into the head of the femur. 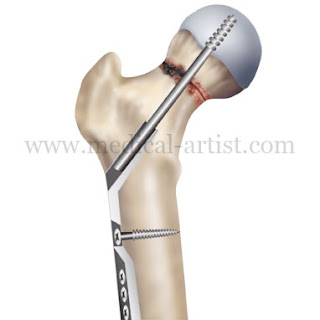 The benefit of this surgery is no bone needs to be removed or replaced, and the hip joint does not require dislocating, therefore patient's can be fully weight bearing on the operated limb day 1 post op (as are all the other hip procedures, unless any unforeseen issues arise in theatre) and prognosis is generally good.

A hip resurfacing is where the head of femur and acetabulum are shaved down (literally cheese-grated - I've seen it!) and replaced with alternate fixtures. This procedure means that the head of femur is still in tact so that further replacements such as the below procedures can be implemented. 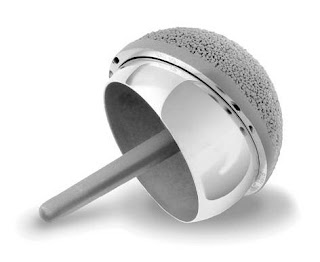 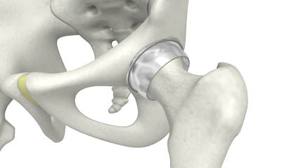 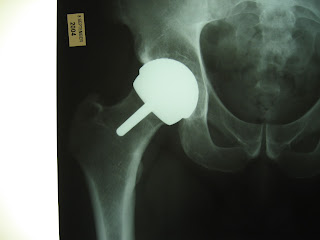 This procedure is also known as the "Birmingham Hip Resurfacing", but, unlike the DHS, the hip joint requires dislocation to get to both aspects of the joint (as do the following surgical procedures).
It is useful for the more active and younger of patients due to the hip replacement "wearing out" and so enabling further surgical interventions, as previously mentioned. It also means a lower risk of dislocation due the the similarity of size in the accompanying parts, as well as a broad range of movement and stability.

A hemiarthroplasty consists of replacing only the femoral head with an artificial structure rather than the whole joint. 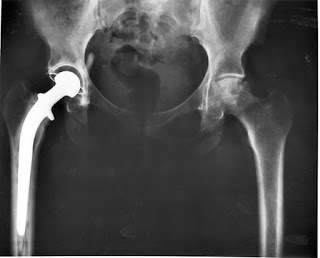 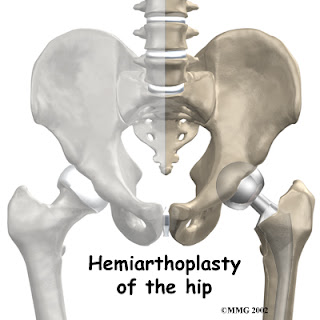 This means the joint is slightly more stable than its total replacement counterpart, as some of the original joint is left in place.

This replaces the whole joint, both the femoral component and the hip socket, the acetabulum. 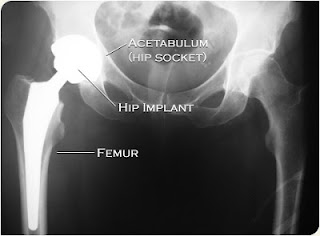 Due to losing all the structures around the hip joint, such as the ligamentous capsule and other ligaments, and the inherent instability of an artifical joint, this replacement is a last effort and is at a higher risk of dislocation. 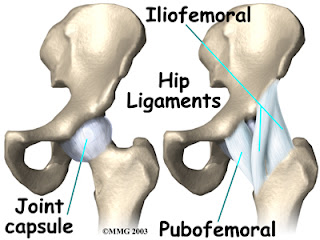 All the above replacement procedures can have cement or uncemented components. This doesn't impact too much and trying to explain it won't add terribly much depth to this post.

So I've already explained what the three hip precautions are, usually implemented for 12 weeks post op, and that the idea of them is to prevent hip dislocation.
Now, the evidence behind the implementation  for total hip replacements is strong, due to the replacement of both the femoral and acetabulum aspect of the joint, then the joint is less stable and congruent, therefore dislocation risk is high.

However, with hemiarthroplasties, only the femoral head is replaced, resulting in a stabler and more congruent joint than a total replacement. Also, the surgical apporach has been changed.


Typically, a hip will dislocate in the direction of surgical approach (Talbot et al 2002), therefore, if the posterior approach is used (as was commonly so), then the hip is going to be at a higher risk of dislocation. However, nowadays, an anterolateral approach can be used, and is preferred, as although it comes with a longer operating time, and an increase in the risk of bleeding and infections, there is a decrease in dislocations and thrombosis (in a study of 531 patients by Keene & Parker (2004)); a posterior approach places the patient at higher risk of dislocating through over-flexing because this is a routine functional position; for example, rising out of a chair.

Studies indicate that, owing to the inherent stability of hemiarthroplasty, that is, the larger femoral head compared with the smaller femoral component in total hip arthroplasties (Baker et al 2006, Sah and Estok 2008), there is little requirement for patients to adhere to hip restrictions.
The British Orthopaedic Association and British Geriatric Society (2007) also released recommendations agreeing with the evidence already described: ‘for hemiarthroplasty introduced via an anterolateral approach … [this] should make any restrictions on hip movements unnecessary’. 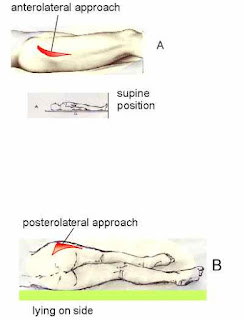 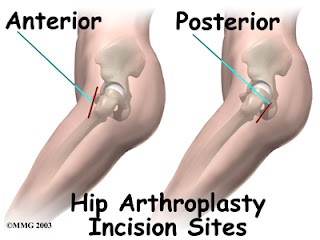 However, the approach used is the decision of the person performing the operation, as both have their advantages and disadvantages, such as the soft tissue structures that are disturbed to get to the joint, as well as those mentioned above, such as risk of infection and bleeding.

How many hospitals still use hip precautions?

In a study by Fox et al (2011) in a telephone audit of all the units within the National Hip Fracture Database in England (174 units in total), 78% still used hip precautions, despite insufficient evidence. McQueen et al (2009) sent out questionnaires to members of the College of Occupational Therapists Specialist Section - Trauma and Orthopaedics, and to therapists who responded to an article in Occupational Therapy News, with a 50% response rate. The results found that 70% of therapists still implemented hip precautions following hemiarthroplasty, regardless of surgical approach.

From an occupational therapy point of view, hip precautions means equipment for patients to help them adhere with the precautions, and time to teach the use of this equipment and re-iterate hip precautions. In the study by Fox et al (2011), a local audit was held, and found that without hip precautions for the hemiarthroplasties, mean equipment costs were decreased from average of £49 to £37 (saving of £12 per patient), and therapist time spent with a patient was decreased by 1.5 hours (from an average of 8 hours to 6.5 hours per patient). Less equipment to order also meant that discharge delay was reduced by 0.25 days.

Figures for hip dislocation rates vary, figures from the Cochrane review (Parker & Gurusamy 2009) reported that:
Other studies have results that vary, but most are similar results to that of Parker & Gurusamy (2009).

Fox R, Halliday B, Barnfield S, Roxburgh J, Dunford J, Chesser TJS 2011 Hip precautions after hemiarthroplasty: what is happening in the UK and at what cost? Annals of the Royal College of Surgeons of England 93:(5) 396-397