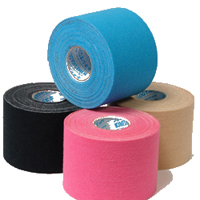 Firstly, let me explain about kinesio taping. Kinesio tape has many brand names (such as Rock Tape, KT Tape etc) and is different from the traditional use of taping.
Traditional taping is using zinc oxide tape and is what is commonly used with climbers to tape fingers etc, and is generally used to prevent a certain movement, for stabilization and support.
Kinesio taping, according the the Kinesio Taping Website, "is applied over muscles to reduce pain and inflammation, relax overused or tired muscles, and support muscles in movement on a 24-hour-a-day basis. The taping is non-restrictive and allows for full range of motion"

The tape is basically an elasticated therapeautic tape.

More information on Kinesio taping and how it is supposed to "lift the skin microscopically" is widely available on the web, but I'm going to now look more at the evidence published.
I will stick to kinesio tape applied to the shoulders, as I feel this is an area appropriate to climbers, rather than the lower limbs. I have also tried to look at the most recent papers I have access to, and a variety of outcome measures tested. 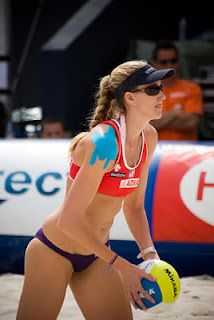 First paper I will look at compares kinesio taping to a programme of physiotherapy modalities for the treatment of shoulder impingement. This study compared 30 patients in the kinesio taping (KT) group to 25 patients in the physiotherapy (PT) group (5 dropped out in the PT group and were not included in the final data analysis) between the ages of 18-70 years old.
Both groups had a home exercise programme. The PT group had daily intervention of TENS, exercise, ultrasound and hot pack. The KT group had just the home exercise programme and the taping, for a 2 week period.
There were no significant differences between groups at baseline.
DASH scores (Disability of Arm, Shoulder and Hand) and pain scores decreased significantly in both groups compared to baseline.
The pain scores for the KT group were significantly lower than the PT group at 1 week, but no significant differences were found at 2 weeks.
Therefore, this study found that kinesio taping is comparable to physiotherapy treatment for the treatment of shoulder impingement, but has a more immediate affect on pain scores.
From a cost implication point of view, the kinesio taping was only applied 3 times in the 2 week period, compared to daily treatment of the PT group, therefore the kinesio taping could be seen as a more cost effective method to reach the same end-point. 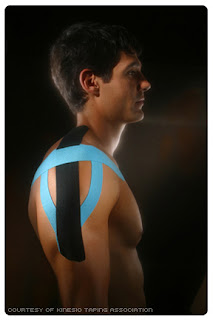 The second study I have read consists of 42 18-24 year olds complaining of shoulder pain. This study compared kinesio taping to a sham application of kinesio tape over a 6 day period with 2 applications of the tape.
This study was more robust that the previous study, with the participants randomly assigned to the groups and the study procedure being double-blinded.
They found that there was only a slight increase in shoulder abduction range of movement on initial application of the tape, but no significant differences were found after 6 days for range of movement, pain intensity or disability score compared to sham tape.
There was also no control group for comparison, and it must be noted that it has been widely published that taping has a high placebo affect (in the case of taping for patellofemoral pain). 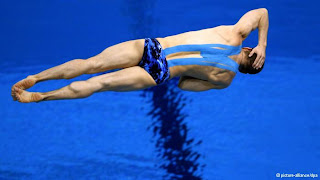 The third study looked at kinesio tape vs placebo taping again, in 17 baseball players with subacromial impingement. There were randomly assigned to the kinesio tape or placebo group first, and performed both interventions.
Outcome measures consisted of muscle activation, strength and scapula range of movement.
The study found that kinesio tape increased lower trapezius muscle activation and strength but it is unclear whether this was significant change, and whether this is a beneficial change to the participant.

Finally, I also read a meta-analysis on kinesio taping in treatment and prevention of sports injuries, and they found similar results to me (regarding slight increase in range of movement), just in a much more scientific manner!


So, in conclusion, I still think that the evidence is weak for kinesio taping, but it has been shown to have a short term effect on range of movement of the shoulder abduction.
This doesn't mean I don't think it works, but it is difficult to measure the effect placebo taping has.
Please feel free to share any anecdotal stories of success with kinesio taping.

So this post, I thought, would be nice to show you some exercises that can be used for warming up, cooling down, or rehab of the fingers (with a little of the forearm and wrist thrown in).
See previous blog posts on finger injuries, symptoms and management, pulley injuries, and hand anatomy for more information.

Sorry to those reading on a mobile app - I'm afraid the formatting performed for this post doesn't carry over to the mobile format very well!!

Below is a sample arrangement of equipment that can be used for rehab or warm up (plus a Metolius GripSaver, but I seem to have misplaced mine, so I had to borrow some pictures from the Metolius website!).
I will discuss various exercises that can be performed with each piece of equipment.
Before performing any of these exercises, ensure you are warmed up (as in raised core body temperature) to prevent any injury.
No information has been given on repetitions or strength of items, as that is a very individual and tailored aspect to incorporate. 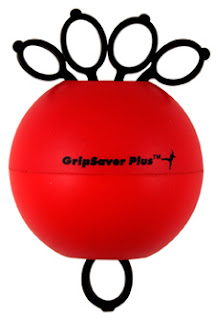 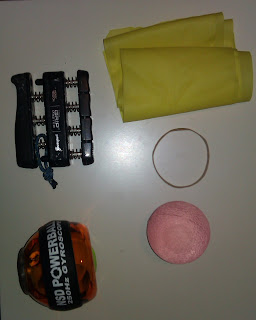 Now, I must confess, the Powerball is much more focussed on wrist/forearm rehab and warm up rather than the fingers, but I thought I'd include it anyway, and is useful for general warm up of the arms before performing specific exercises. 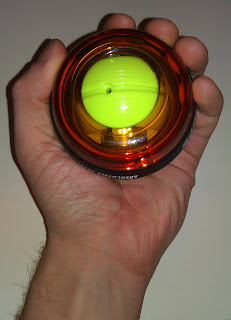 The Powerball is used for rotation about the wrist. If you have one, when using it, remember to vary the direction you spin it in, as it then uses your muscles in different ways.

I'm not going to dwell much more on the Powerball, but useful for warm up generally.

These "stress ball" type items are brilliant for rehab and warm up. They come in various "strengths", but personally, the weaker the better, as then you can easily add more repetitions of the exercise to get more of a workout, and is therefore more versatile.

For a simple warm up exercise, the ball can be squeezed repetitively in a gross grip manner to get the muscles working. When relaxing the grip, make sure you spread the fingers back to a "flat palm" position to ensure the fingers are going throught their full range of movement. 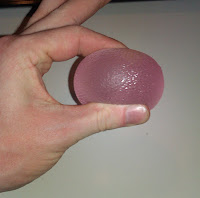 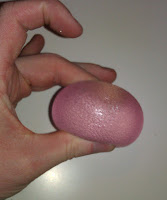 Next, more specific exercises.
Squeeze the ball between thumb and finger, alternating fingers. 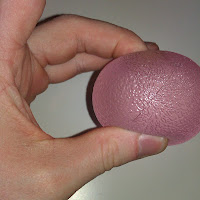 Next, squeeze the ball using two finger grips such as middle and ring, or index and middle fingers. 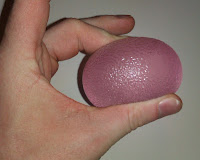 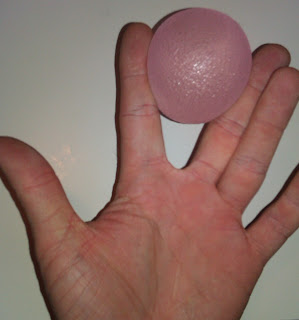 A tricky one next, and is difficult to do anyway, but would be even more difficult with a higher strength ball.
Squeeze the ball between two fingers (I'd recommend doing this with the ball held by the other hand)
This works the hand interossei muscles (the muscles that adduct and abduct the fingers)

Remember to perform in all finger spaces! 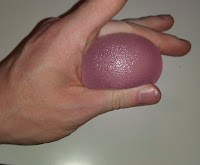 And finally, to work the lumbricals, squeeze the ball by only flexing at the metacarpophalangeal joint. 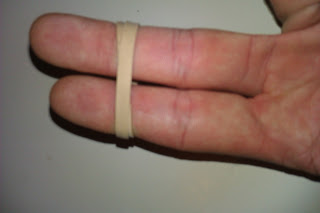 So, onto the cheapest form of rehab equipment - the majestic elastic band!
These are much better tool for working the interossei muscles, and you can vary the difficulty of strength by simply using a thicker elastic band, or by moving it up a joint. 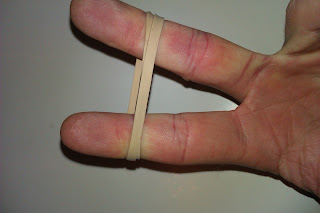 I've demonstrated using the elastic band at the distal phalangeal joint for illustration purposes, and would normally begin with this exercises as close to the metacarpophalangeal joint as possible (nearest the base of the finger). 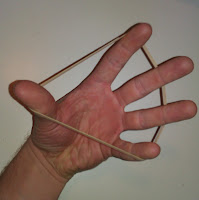 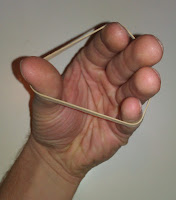 Now, I know alot of climbers own these, and they are ok, but in no way as flexible as a therapy ball or elastic band.

These exercises have been inspired by those on the GripMaster website, though many are similar in nature to those that can be performed with the therapy ball. 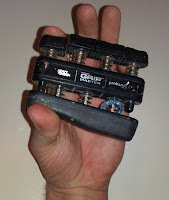 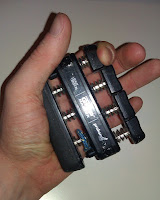 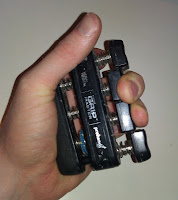 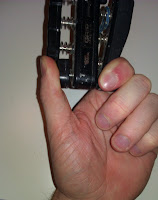 This, again, can be done with all fingers, and with the combination of two finger grips

Key pinch grip can be performed, however, is not very functional in a climbing aspect (well, not that I've found yet anyway!) 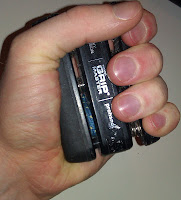 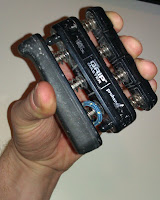 And again, similar to the hand therapy ball, gross grip warm up, or gross finger tip grip can be performed. 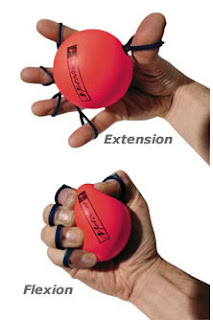 So, the Metolius GripSaver incoporates the elastic band extension exercises with the therapy ball flexion exercises, but isolates each finger better for the extension aspects of the exercises.
They are useful in their own right, but I suppose it's personal preference!
All the exercises have already been described above. 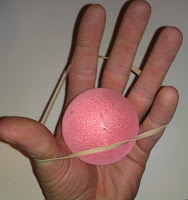 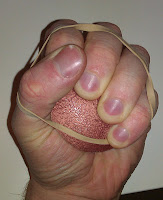 However, this can be recreated in a fashion, with the therapy ball and elastic band, as shown!

I hope these exercises provide you with some ideas and handy hints to warming up and rehab of injuries. Any comments, let me know!

P.S. The theraband was shown in the first picture as you can use it in a similar way to the elastic band extension exercises, but is less specific and more awkward to use, so I didn't include it!

See the below websites for some more and varied exercises:
Hand and wrist exercises by Total Orthopaedic Care
Theraputty exercises by Northwestern Medical Hospital
ClimbingStrong.com for an interesting DIY method of rehab
Posted by Unknown at 07:22 No comments: