So, there has been a lack of posts recently, I apologise, I've been working on an application for the Physiotherapy Board of New Zealand. This has been a lot of work and so taken up a lot of my time. However, below is a guest post by Robert Bradshaw-Hilditch, a podiatrist from Staffordshire:


A recent straw poll of delegates attending the 3rd BMC Injury Symposium 2014 indicated that almost everyone has experienced some form of foot pain whilst climbing most often relieved by removing their climbing shoes. I am pretty certain that they are not alone in fact it was precisely this observation that led to this research being undertaken.
The traditional approach to choosing a pair of rock shoes has been to go for something that is snug or tight fitting, I can certainly remember being given the salient advice of " go for something that a size smaller than you normally wear " by the longstanding members of my first climbing club. To this end countless published research (Killian (1998), Buda et.al. (2013), Schöffl &  Küpper (2013),  continues to show evidence that climbers tend to go for a shoe size smaller than their normal shoe size. This research showed that this trend was still present, having said that we did have a number of subjects that were using like for like sizes or larger rock shoes. One of the interesting facts that the research did show was that when normal shoe size, rock shoe size and a measurement of the subject’s foot using a Brannock device was made and all three were on occasions different. All subjects were adults and let's face it for most of us it’s a long time since we had our feet measured for shoes. A point of conjecture regarding rock shoe sizes and the equivalent sizes of a normal shoe revolves around each manufacturer interpretation of shoe size, the process of measuring the size and how this is influenced by rock shoe design and lasting. (van Egeraat and Snijders (1987), C.J. Snijders et.al. (1984) van der Putten (2001))


So what did we do, each subject was asked to complete a series of trials on the indoor bouldering walls a AWCC Stoke during which inshoe data was collected using a FScan (Tekscan) system. The inshoe data collected allows us to see pressure and force loadings occurring at the interface between the sole of the foot and the insole of the rock shoe. So what did we find, whilst climbing a right to left traverse our male subjects were producing an average loading force of 1531.60(sd 396) Newtons (N) under the left 1st MTPJ and 1653.11(sd 852.29) N under the right 1st MTPJ. The difference between the two values we feel is a representation of the direction of travel i.e towards the right and may well indicate how we use asymmetrical forces to produce equilibrium of movement. Whilst the loading rates are high what was also evident was how long the load was applied for in one case it was noticed that this load was applied for 8-10 seconds. This may not sound long but the next time your down the gym try leg pressing 168kg and holding it for 10 seconds, not forgetting you are using both legs and applying the load to whole of your forefoot. This reading was taken from the base of the 1st MTPJ an area of around 1cm2. We also collected impact data from a drop of 2 metres onto a 30cm crash mat giving us the following readings; average 2203.95(sd 656.95) N or 225kg and pressure data of 1371.55 (sd 575.60) kPa.


So what does all this mean, firstly we how have imperial data demonstrating the force and pressure loading being experienced by the foot whilst climbing indoors, this data shows the magnitude and duration for which the foot is exposed to these load. Obviously these values will vary dependent upon a person’s physical mass, foot wear being worn, the complexity of the route being climbing, how long the footwear is worn for and whether you are leading or seconding.


The data from the size of footwear reinforced existing research but may have hopefully started to show a new pattern is footwear size especially amongst those subject who only climb indoors and have recently started climbing. It is the combination of these factors that will combine to produce the discomfort that we have all experienced at some point along with whole host of other environmental, physiological and psychological factors. In essence each of these factors are exposing the forefoot structure to forces and pressure that could result in the occurrence of repetitive strain based injuries especially on longer climbs, climbing holidays or when training.


The research team recognise that to change the mind sets and habits of any sporting population is a complex and difficult task but if we can help to influence those who are just venturing into the world of rock climbing and to maybe suggest that two pairs of shoes could be used. A pair that are your normal shoe size for training in and warmup use and if you wish a snug closer fitting pair for those projects or sends that you are working towards.


So once again the simple take home messages are: 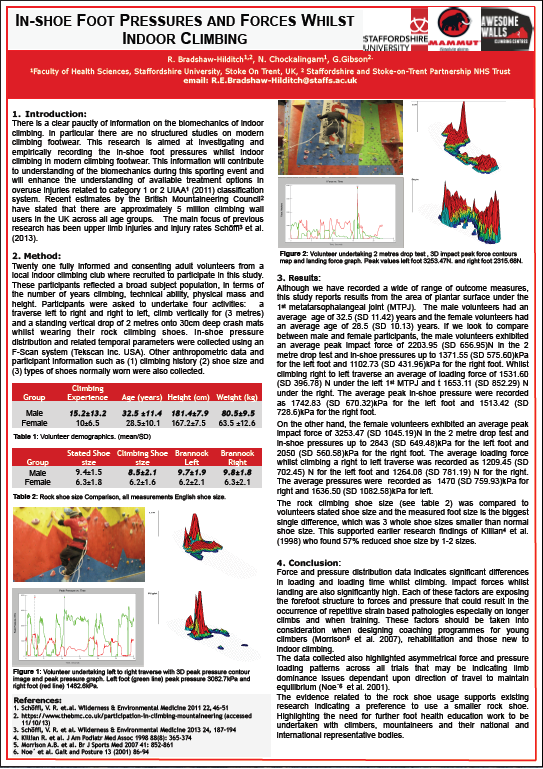